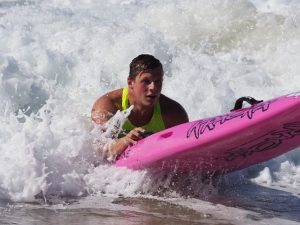 Newport Beach delivered a picture-perfect day for the last patrol of the season (28 April) and the running of the Kings Cup, Carroll Cup and Nipper Porter Race.

Competitors lined up first for the Carroll cup, a 2.5km handicapped board race starting from the beach in front of Newport Surf Club, 200m out to Kylie (our famous swim buoy), then clockwise around the tip of the reef and back to the club passing through the notorious cross waves.

A quick phone conference with the race’s names sake Nick Carroll, on his way back from reporting on the Bells Beach RipCurl Pro, set the handicaps. Jan Proudfoot set the pace starting off scratch with our very own Australian Open Ironman Champion Max Brooks bring up the rear starting 3mins 40 sec behind.

But it was Jayke Rees who produced the goods and proved a 1-minute lead over Max was charity for the former Junior Olympian. 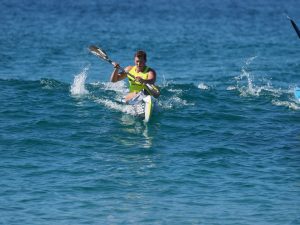 Next came the Kings Cup, same course as the Carroll Cup but with no handicap to rely on it was every man and woman for themselves. With our Masters crew leading the pack to the reef they were left wondering if they had taken the wrong course, only to look back to find our cheeky elite crew happily sitting on their wash. Once we hit the northern tip of the reef decisions had to be made whether to play it safe or cut the reef which left our Water Safety Ski driver Matt Edwards wondering if some were riding rental skis. The chaotic conditions of the swell rebounding off the reef saw the pack spread out leaving a race of three, Max Brooks, Jayke Rees and Taylor Gabb well in the lead back to the beach.

In the end it came down to a tight finish with a sprint up the beach which saw Jayke take out the Kings Cup. Could Jayke take out the triple crown with a win across all three races? With one race to go the bookies recalculated the odds and the usual punters were seen, binoculars in one hand wallet in the other. 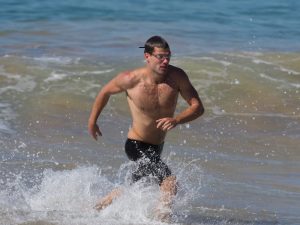 The Nipper Porter Race constituted a swim around Kylie back to the beach with many of the same competitors who participated in the King and Carroll cup. Whilst no official handicap was in place a review of the starting video shows one Masters Competitor jumping the start only to see a wardrobe malfunction deliver poetic justice following an overly enthusiastic leap over the shore dump.

Once again it came down to a race in three as Brandon Bartlem, a late entry and wild card, set the pace off the buoy back to the beach with Max Brooks and Jayke Rees in hot pursuit. As the crowd on the beach struggled to make out positions in the wave zone it was the Australian Ironman Champion Max Brooks, closely followed by Brandon, who denied Jayke his claim on the triple crown. Max’s trade mark body surfing skills making the difference in the end.

Thanks to all the competitors, water safety and official / photographer for making sure the event was a success.