New South Wales surf lifesavers have, yet again, defended their title at the Australian Interstate Championships, squeaking by six points over their rival Queensland.

On 24 January, Alexandra Headland on the Sunshine Coast in Queensland hosted teams from Western Australia, South Australia, Victoria, NSW and Queensland.  Over 180 competitors across Australia battled over a total of 92 races to represent their state in youth and open divisions.  Many Ironmen and Ironwomen, fresh off the Nutri-Grain series, as well as representatives from the Super Surf Team Leagues competition provided a day of sports excellence. 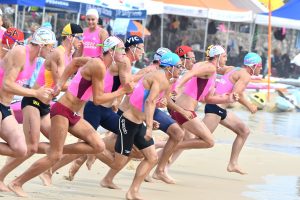